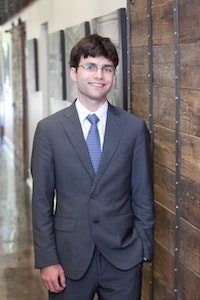 Harris was born, raised, and educated in Birmingham, Alabama. He graduated cum laude from the University of Alabama at Birmingham in 2015 with a double major in philosophy and sociology. Harris earned his J.D. with academic honors from the Birmingham School of Law in 2018, graduating in the top 5% of his class. He was a member of the Judge Hugh Locke Honor Society from 2015-2018 and received honors for his work in Conflicts of Law and Legal Research/Writing. While attending law school, he clerked for two Birmingham firms where he gained skill in personal injury and social security disability. After law school graduation, Harris spent a year as a Solo Practioner, where he garnered experience in personal injury, criminal defense, and workers' compensation law. At Hollis, Wright & Clay, P.C., Harris' primary area of focus is in representing workers throughout Alabama who have been severely injured while on the job. Harris has developed a deep understanding of the Alabama workers' compensation system and is proud of the results he has been able to achieve in advocating for his clients. Harris also handles a variety of personal injury claims, including automobile accidents and premises liability claims.

When not practicing law, Harris enjoys spending time with his wife, Mary Parker, and their two sons.

United States District Court for the Northern District of Alabama
Member Since: 2019