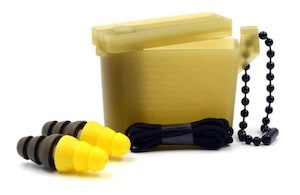 The attorneys at Hollis, Wright & Clay, P.C. are investigating cases from veterans across the country who suffered hearing loss and/or tinnitus as a result of defective 3M Combat Arms Dual-Ended Earplugs. These earplugs were distributed to service members from 2003 to 2015. 3M held the exclusive contract to manufacture and provide dual-ended earplugs to the United States military.

In July 2018, The Department of Justice (DOJ) announced that a settlement had been reached with 3M, the manufacturer of the 3M Combat Arms Earplugs. The lawsuit was brought under the False Claims Act and alleged that 3M Combat Arms Earplugs were defective. In addition, it also alleged that 3M had known about the defect. As a result of the whistleblower suit, 3M agreed to pay $9.1 million to the United States government.

How did 3M Arms Earplugs Cause Hearing Loss and Tinnitus?

The 3M Combat Arms Earplugs were designed to allow two different levels of noise reduction—one would prevent the user form hearing any noise, and the other would block the loudest sounds but still allow the user to hear commands. However, the dual-ended earplugs were too short to be properly inserted into the user's ear, causing them to gradually loosen during use. As the earplugs loosened, they were effectively useless at noise reduction. Men and women in the military who used these earplugs were exposed to damaging sounds and subsequently suffered from hearing loss and/or tinnitus.

The attorneys at Hollis, Wright & Clay, P.C. have extensive experience holding corporations like 3M accountable for the harm they cause. If you or a loved one served in the military at any point from 2003 to 2015 and suffered hearing loss and/or tinnitus after using 3M Combat Arms Dual-Ended Earplugs, you may be entitled to compensation. Contact the product liability attorneys at Hollis, Wright & Clay, P.C. today at 205.324.3600, 844.LAW.TALK, or fill out the online form here.