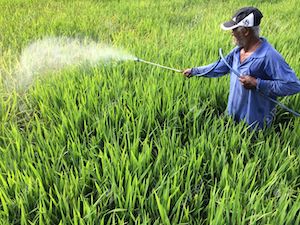 Paraquat is a chemical herbicide, or weed killer, that has been commercially available since 1962. Despite the fact that it is highly toxic, it is used all over the world. In fact, paraquat, also known by the brand name Gramaxone, is one of the most common herbicides used today, but it can cause fatal poisoning when ingested or inhaled. It is a restricted-use herbicide that should only be mixed, loaded, and/or applied by individuals who have completed an Environmental Protection Agency (EPA)-approved training program. Studies indicate that prolonged exposure can be linked to Parkinson’s disease. Parkinson’s disease is a brain disorder that ultimately leads to shaking, stiffness, imbalance, difficulty walking, difficulty talking and a deterioration of overall coordination.

The Centers for Disease Control and Prevention (CDC) closely follows paraquat because the agency considers it to be more toxic than other herbicides. The chemical’s toxicity manifests through ingestion, skin-absorption, and inhalation. Besides possibly causing burns to the skin, the herbicide can cause birth defects, cancer, and Parkinson’s disease. Paraquat is one of only two herbicides still being used in the U.S. that has already been banned or is in the process of being phased out in China, Europe, and Brazil.

The Alabama paraquat attorneys at Hollis, Wright & Clay, P.C. are currently handling cases for individuals that were exposed to paraquat and were subsequently diagnosed with Parkinson’s disease. If you or someone you love has been diagnosed with Parkinson’s disease after being exposed to paraquat, contact the paraquat attorneys at Hollis, Wright & Clay, P.C. for a free case evaluation. You can reach us at (844) LAW-TALK or (205) 324-3600 or online here.

Please note, you do not have to be a paraquat-licensed commercial farmer to be negatively affected by the product. Studies indicate those who live near farms on which paraquat is used can also become sick from the chemical and are at a 75% greater risk of developing Parkinson’s disease. Moreover, if you were exposed to paraquat many years ago and only recently were diagnosed with Parkinson’s disease, you may still have a viable claim. It can take as long as a decade for an individual exposed to paraquat to start exhibiting symptoms and actually be diagnosed with Parkinson’s disease.

How is Paraquat Used?

Paraquat is applied directly to plants and weeds as a spray and kills the leaves with direct contact. It is inactivated when it makes contact with soil. Some uses of paraquat are as follows:

Sales for paraquat are up, with global sales hitting some $640 million in a recent year. This is in part due to the fact that the popular herbicide Roundup has been involved in high-profile litigation involving individuals developing Non-Hodgkin’s Lymphoma (NHL) after exposure. Additionally, there has been an increase in weeds that are resistant to glyphosate-based herbicides such as Roundup.

In the United States, paraquat is available primarily as a liquid in various strengths to those who are licensed applicators. Because paraquat is highly poisonous, the form that is marketed in the U.S. has a blue dye in it to keep it from being confused with a beverage. Additionally, it has a sharp odor to guard against accidental ingestion. As another level of protection, U.S. paraquat has an agent mixed into it that induces vomiting should it be ingested. Paraquat sold outside the U.S. may not have these safeguards. However, Parkinson’s disease can occur after long-term exposure to paraquat. It does not have to be ingested to cause Parkinson’s disease.

In 1997 the EPA announced that the exposure to paraquat during the mixing, loading, and application of the herbicide and during the post-application process represented the primary exposure to the chemical. However, the agency further suggested that despite the herbicide not being registered for residential use, such exposure is possible for individuals who live near farms where the herbicide is used. Meaning, you don’t have to be a commercial farmer who is licensed to use paraquat to be exposed to the chemical. In fact, recent research indicated that any exposure to paraquat within 1,600 feet of a home resulted in the risk of developing Parkinson’s disease increasing by 75 percent.

What is Parkinson’s Disease?

Parkinson’s disease is neurodegenerative disorder that is disabling. Symptoms include: tremors in the arms and legs, impaired coordination and balance, slow movements, and rigidity of the body and limbs. Such effects are due to the progressive degeneration of neurons in the brain.

Genetic factors can play a role in some Parkinson’s disease cases, but the main cause for the affliction has generally been unknown. In recent years, an increasing number of scientific studies have linked Parkinson’s disease, the second most common neurodegenerative disease, to environmental exposures such as pesticides. Parkinson’s disease is not curable. Medical treatments only offer partial relief for symptoms.

If you or someone you love has been exposed to paraquat and been diagnosed with Parkinson’s disease or other health issues, contact the trusted Alabama paraquat attorneys at Hollis, Wright & Clay, P.C. as soon as possible for a free evaluation. You can contact us at (844) LAW-TALK, (205) 324-3600, or online here. Remember, you don’t have to be a commercial farmer to have been exposed to paraquat, you only need to live close enough to a farm or industry that uses the chemical.