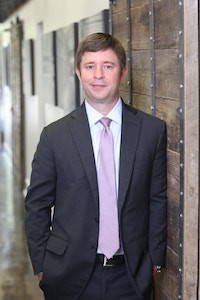 Hollis Wright Partner Bobby Bell, born and raised in Birmingham Alabama, has represented thousands of clients in mass tort pharmaceutical and medical device cases during his career at the firm. Through his hard work, dedication and resolve to meet each client’s needs and goals, Bobby was named partner effective 2017 after starting at the firm in 2008.

Bobby thrives on the challenges of the highly-complex, multi-district litigation cases to which he dedicates his career. With his qualified and caring team of legal assistants and paralegals, he is able to handle a large number of clients in a variety of pharmaceutical and medical device litigations throughout the country. Securing just compensation for his clients is his ultimate motivation and goal.

Based on nominations from his peers in the legal community, Bobby enjoys many awards and distinctions, including being named one of the Top 40 Under 40 Lawyers and Top Attorney Rising Star in Alabama and the Mid-South. He has also been named one of the Top Lawyers in Birmingham.

Bobby is experienced and involved in many types of medical device and pharmaceutical litigations, including but not limited to the following: